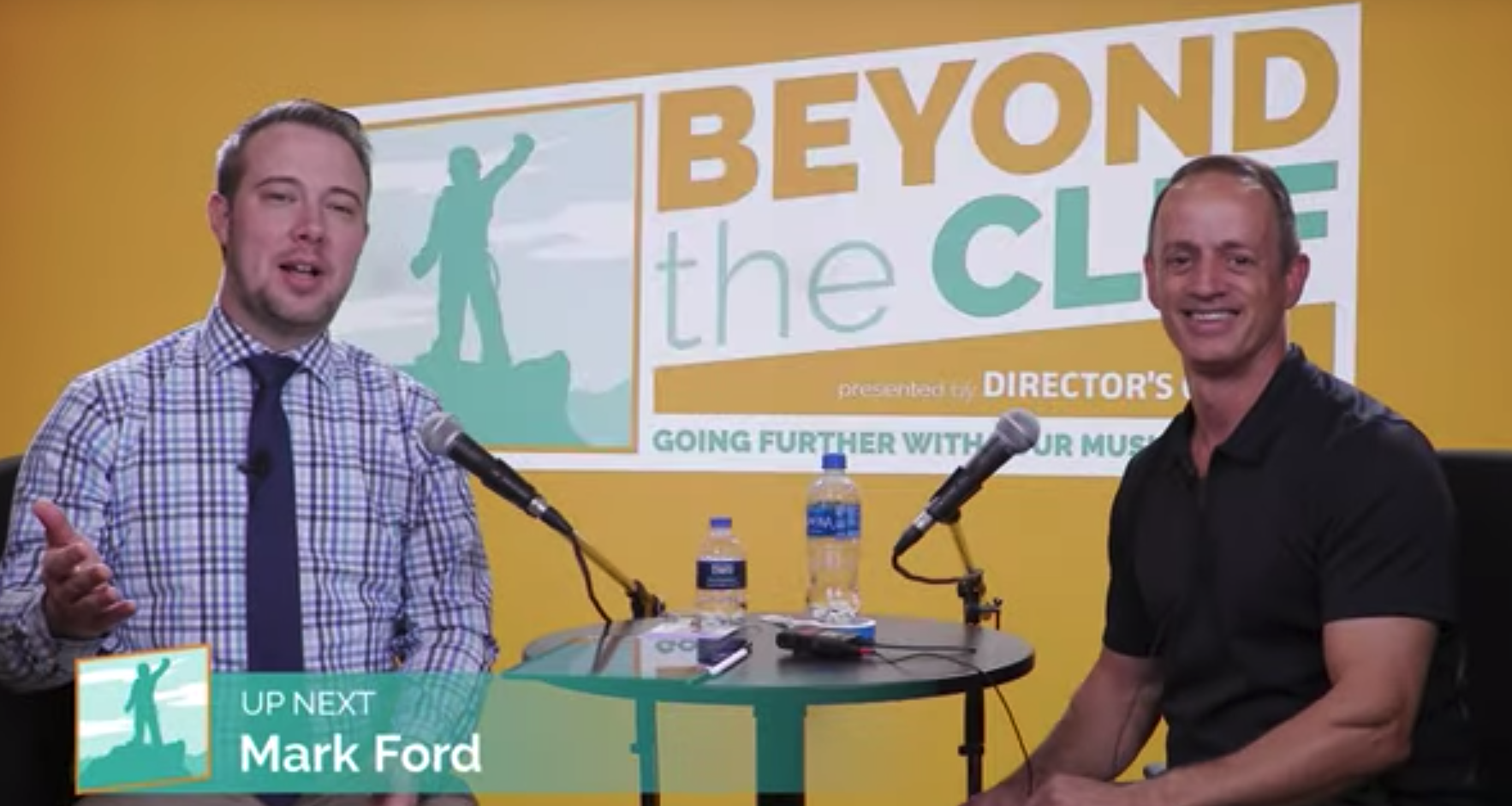 Earlier this year, we sat down with Mark Ford, marimba artist and the coordinator of Percussion at The University of North Texas College of Music, one of the largest percussion programs in the United States, to talk about the etudes in the All-State process, general percussion knowledge and some ideas for those teaching percussionists and his involvement with our Percussion Festival in 2020. Check out the excerpt below!

David Biel, host of Beyond the Clef podcast: Tell me a little bit about what you do at [the University of North Texas].

Mark Ford: My job is to teach percussion obviously, and to create an atmosphere where our students can grow and be creative. Because this percussion program in North Texas isn't a traditional program, we have a huge world music program. So in addition to traditional percussion ensembles, we also have groups like two steel drum bands, African ensembles, two Afro Cuban ensembles, a South Indian ensemble, Brazilian. We have a really good drumline, by the way, too. I mean, there are so many ensembles and ways for students to apply themselves. My job, I feel, is to coordinate and to create the opportunity for the students and the teachers to really see what's possible.

DB: What is your overall philosophy? What do you want them to learn at North Texas by the time they’re out?

MF: I think what we want them to be is musical and expressive, and to realize that to play music well, it's not about necessarily putting the right note in the right place, but to have some form of expressive feeling and connection with the music. And of course, there's many details that we can talk about with percussion. There's so many instruments that they have to master to be able to be competitive in today’s market.

On All-State Etudes
DB: What advice do you have for the band director out there that wants to take a talented child from where they are into the All-State process and achieve? What do you think is maybe best route for that child?

MF: I think that with any competition, is not to focus on the competition. I mean for me, I always want to put the music first. I mean, you really have to think about it. What's the magic of this particular etude? What musical components are going to be beneficial for my student playing that piece of music, and how am I going to relate that to that student? For me, it's always about playing a small amount of material, but playing it at a very high level. So maybe they work on the first four bars, for example of the snare drum etude.

I had a student today, the snare drum etude, the meter is 3/16, and they're like, "I don't know what to do with 3/16," and I explained to them it's all about the groupings. It's really about groups of threes and twos. It doesn't matter what the note value is really, as long as you understand the relationship, what's different between a 16th, and an eighth, and 32nd, then good to go. But the idea is that they can learn a lot because in percussion, we have to read meters like that all the time, but younger students may not have that opportunity, so this is a good teaching tool.

Maybe they take the first line of the etude, and try to play it at tempo with dynamic contrast, with the agogic accents that bring out those groupings. And in other words, try to play the music in that practice session like the concert is tonight. "Hey, I'm Mark, I'm going to play the first eight bars of this etude." I mean, that's how you have to think when you're practicing, because you want to get every detail covered.

What a lot of students do, and I know what I did when I was a kid, I would kind of learn it, and then I'd have to go back and fix it, and then fix it again sometimes, and fix it again, but if you're patient and you're thorough, you can study four bars. I think any student walking through these halls could say, "Yeah, I could study four bars," and get all the details of what the composer has written, and make that sound in the performance. That's a skill, and really, that's what professionals do.

They're not going to go through the piece 10 times, they're going to know exactly what they're trying to achieve in the beginning, and that's something we can instill in our students, I think.

On Choosing Music
DB: What is some advice that you have for a middle school director like me going out and seeking out music?

MF: I would tell you, I think for band directors listening to this, that the reality of percussion pedagogy in the band room, and this goes back to when I was starting band in Richmond, Virginia is that what's going on in the beginning bands is that the winds, the brass and the woodwinds, right from the very first day after the horns are put together, they're dealing with sound. I mean maybe not good sounds, but they're dealing with sounds, pitch, change, tone. They're dealing with projection, everything.

The drummers, percussionists are never dealing with sound. They're dealing with rhythm, subdivision and dynamic intensity. Never about sound. No one ever asked the young drummer, "Hey, how does that snare drum blend with this clarinet? I'm like, "You want it on three or where do you want it?" So I think for when you're choosing percussion ensemble music for a younger group, you've got to think about pieces that they can relate to to the concert band music and or to the orchestra if they're doing that as well.

We've got to put an emphasis on creating, making percussionists to be great listeners. I'm talking about phrase direction, how a phrase cadences, where do they breathe, where should I breathe with this piece? How about blend? What's my role? Do the clarinets have the melody here? What am I supposed to do with these 16th notes? So we've got to start thinking about sound and in doing so there's lots of great teachers in Texas, goodness that are doing this.

But I think as a general, this is one area that we can move ahead on and we can apply it best in the younger percussion ensemble pieces. Talking about phrasing, talking about balance and blend. It doesn't matter if you're playing in Carnegie Hall or in your gymnasium. Those issues about balance are still present in every ensemble. If the student is aware, they can really make a difference and have a better experience with the music.

On the Director’s Choice Percussion Festival
DB: Our sponsor of the podcast is, of course, Director's Choice, and I'm seeing that there's a percussion festival coming up soon and I think you're involved in that. Can you tell us a little bit about it?

MF: I'm very honored and privileged to have been asked. Director's Choice is doing a percussion ensemble festival at Oak Ridge High School in Conroe, Texas near Houston. They've invited myself and very distinguished panel, Dr. Brian West from TCU School of Music and Dr. Brian Zator from Texas A&M at Commerce. It’ll be the three of us listening to percussion ensembles. And here's the cool part is that yes, it's a festival so we're going to give comments and there's two of us that give comments.

One of the judges in a rotation will be talking with the ensemble that just performed so we can give instant feedback while those kids still have that experience fresh in their mind and talk to the directors about things that went great, things that maybe could be a little bit better, tuning choices, all kinds of issues that could come up based on the notes that we took while they play, of course.

So it's a really exciting thing and to my knowledge, [there are] only two festivals like this, and we need to have more of it.