Beyond The Clef With Colonel Palmatier

As part of our Beyond the Clef Legacy Series, we are honored to sit down with Colonel Thomas Palmatier, the retired commander of the United States Army Band, Pershing's Own. In this episode, we discuss his time with Pershing’s Own and the time he spent in the White House working with sitting presidents, and later we dive into his thoughts on music education and walk away with some sage advice from a true legend. Take it away, David!

David Biel: Can you tell us, for those who don't know you, a little about yourself?

Colonel Thomas Palmatier: I'm a band kid. I'm from Upstate New York, Burnt Hills Ballston Lake was a wonderful suburban district north of Albany, great musical educators. I started in fourth grade on trumpet like pretty much everybody, and I did really well. I was first chair, first trumpet, in my fifth grade band, and my fifth grade band director was Anthony [Mielo 00:03:02].

DB: Oh, wow. We had him on the program before actually.

CTP: Tony was my fifth grade band director. It was his first year teaching, and he was a ball of energy. He really made a big impression on me and we're still very, very close friends.

My seventh grade band director is who I owe my career to. The life I have now, I owe to Don Boucher. As the music got higher [in middle school] I started slipping down in the section.

By the time early seventh grade came by the music was getting high enough, and I couldn't play about the third space C. No matter how much I practiced. No matter how hard I tried. That's as high as I could go. [Don] recognized that I had some ability, and certainly a lot of want to, but I couldn't do what I needed to do on that instrument, so he changed me to tuba.

In ninth grade, I was selected for the New York All State Band, and became first chair with Dr. William Revelli as the conductor. Now, when Dr. William Revelli was the director of bands at the University of Michigan. He was famous for having fabulous bands, but also famous for. He was an old school tyrant. He was a tough cookie. Whenever you displeased him in any way, you went to the bottom of the section. It was a constant musical chairs going on. I started first chair, and I ended first chair.

CTP: Yeah. I ended first chair with Dr. Revelli. After that, I was lucky enough to attend the Crane School of Music. I was able to be first chair in the Crane, wind ensemble as a first semester freshman. I'll tell you the story behind that because – this doesn't apply just to music – [it’s proof] the jobs go to people who show up on time. The wind assemble director was Elliot Del Borgo, very well-known composer. He had a rule: Crane wind assemble rehearsed once a week, 7-9 p.m. on Monday nights, and at 7 p.m. he locked the door.

If a seat was empty, that person was out. It didn't matter why. It had to literally be a life or death, and then you were probably dead, so the chair was open anyway. So we all knew that you hung around the door with your instrument just in case there was an opening.

It was the night before they were to perform at Eastman Hall. The home of the Eastman Wind Ensemble, so you can imagine Crane Wind ensemble in Upstate New York now going to play at Eastman Hall. It's kinda like when the Red Sox visit the Yankees. Crane is a fabulous music ed school. Eastman is Eastman. But still, they were taking our wind ensemble into the belly of the beast and doing a concert.

[It was the evening of] the dress rehearsal. The door clicks, and a minute later I see two senior tuba players huffing down the hall with their horns – late. The door opens, they apologize. He said “Sorry guys, bye-bye.” He pulls out a notebook – the studio teachers gave Professor Del Borgo a very, very highly secret list of all their students in rank order.

He started calling out tuba players, and my name is Palmatier, not that easy to pronounce, so I hear “Par-may-ter.” I said, “Yes, sir.” He said “You got your horn with you?” Yes, sir. “Do you want a tux?” Yes, sir. He said “You're first chair, go.”

The performance was the next night at Eastman Hall. [I was] first chair of the Crane Wind Ensemble as a first semester freshman, and it was all because Don Boucher switched me to tuba, and because I had a band director, Tom Brown, who was also kind of a tyrant. There was no such thing as being late. You could be late to other classes, you could not be late to band.

I knew that one of the secrets to success in band is early is on time, on time is late. I was there on time, ready to go, and I owned a tux. The rest is history. 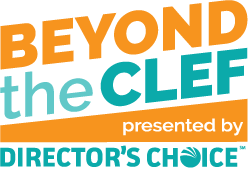 To listen to the full episode, visit the Beyond the Clef website or download wherever you get your podcasts!